Recently, the Pierre Auger collaboration presented a measurement of the cosmic ray spectrum near the feature known as the "second knee" using data collected over 4.5 years with the dense area of the surface detector (SD) with 750m spacing, SD-750. 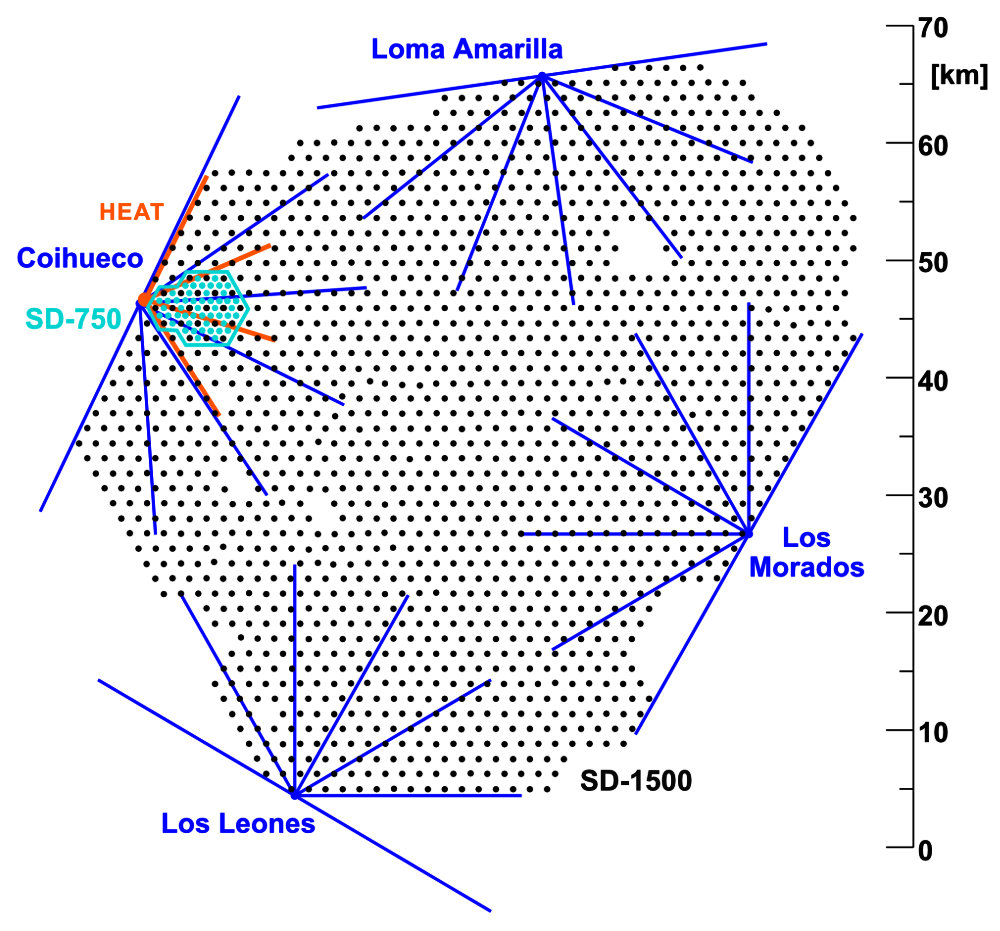 Figure 1: The relevant components of the observatory for this analysis are shown above. The water Cherenkov tanks, which comprise the surface detector (SD), are represented by the circles. The larger array, SD-1500, is shown in black and the more dense array, SD-750, is highlighted in cyan. The fluorescence detector (FD), which sets the energy scale for this analysis are shown by the lines, which represent the field of view for the individual telescopes.

This measurement expands upon the previous measurements of the CR flux by one and half orders of magnitude from 10^18.5 eV to 10^17.0 eV.

Beyond a characterization of the rate at which cosmic rays arrive at Earth, the energy spectrum gives clues as to the underlying physics that is happening as a function of energy. While the spectrum of cosmic rays follows a power law of the form J(E) ~ E^-γ, where γ is about -3, there are several deviations from a power law. Several have been given names such as the "knee" at about 3 PeV, the "ankle" at about 7 EeV, and the "instep", recently identified in an analysis by the Pierre Auger Collaboration, at about 10 EeV. Each of these features corresponds to change in the spectral index, γ, i.e. an energy at which the spectrum becomes either steeper or more shallow. One of the models that best fits with our observations of cosmic rays is that these wiggles correspond to changes in the underlying mass composition. Most relevant to our newest publication is the feature called the "second knee" which has been observed by other experiments to correspond to a sharp decrease in the abundance of heavy elements, which has also spawned the name the "iron knee". This feature is located at about 100 PeV and has been postulated to be the upper energy limit with which the same sources that make up the "knee" are able to accelerate particles.

Even for our most dense array, with 750m spacing between detectors, we needed to enhance the SD to be able to study the cosmic ray flux near the second knee. This came via the addition of two new algorithms, which we apply in real time to the pulses seen in the water tanks, which allow us to be more sensitive to the photons, electrons, and positrons in the air showers. The main benefit is that after the implementation of the new particle triggers in mid-2013, the SD-750 is now more sensitive to lower energy showers. However, we are also able to observe the low-energy edges of the footprints of air showers on the ground. This additional information is used to produce a more accurate energy assignment. 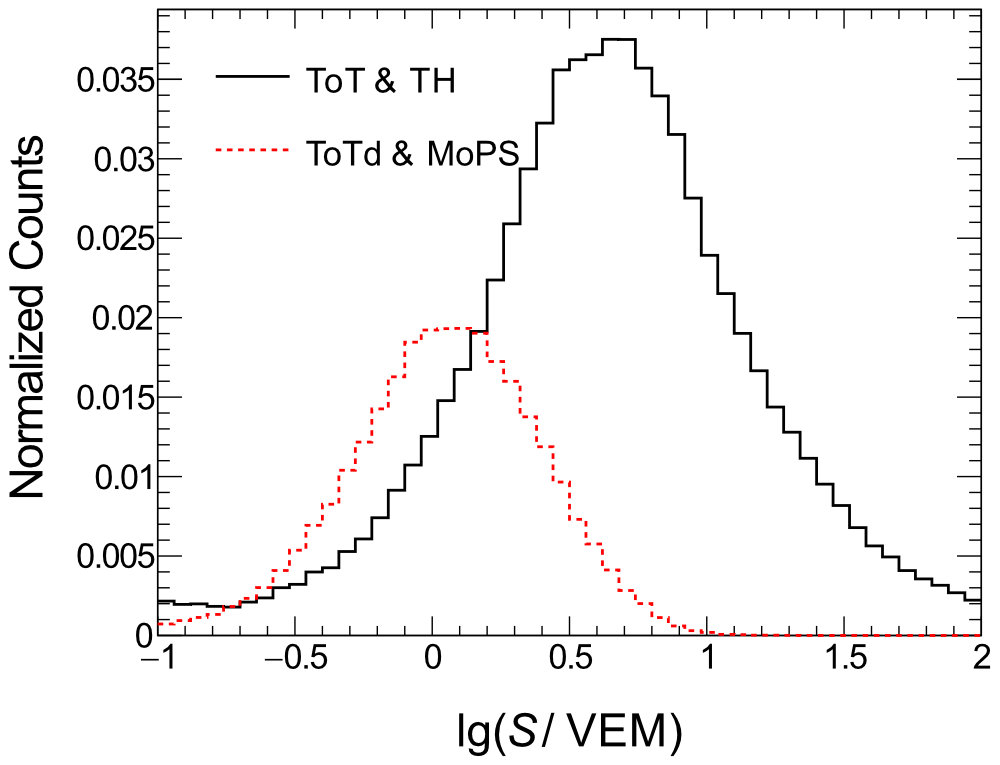 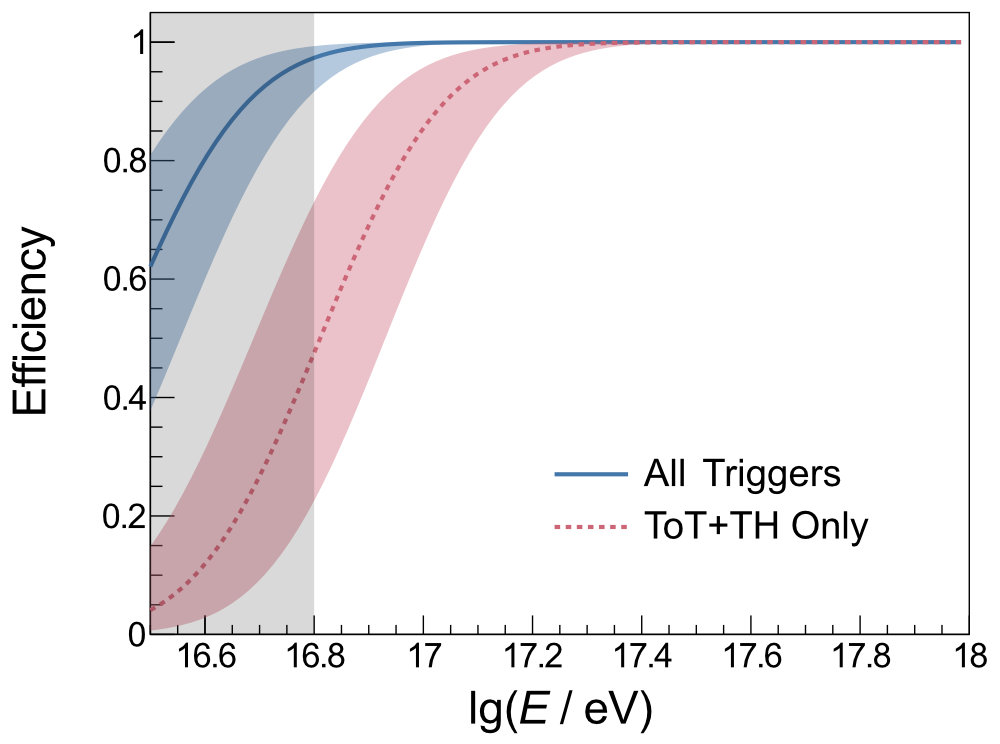 Figure 2 and Figure 5: The left plot shows the increased sensitivity of individual SD stations to low energy signals. The observed signal amplitudes for the original triggers are shown in black and the ones that are now observable at Auger are shown in red. For reference, 1 VEM corresponds to the signal created by a single, vertical muon with about 1 GeV of energy. The increased efficiency of the array after including these triggers is shown in the plot on the right. The effect of the new triggers is an improvement of the energy threshold by almost half an order of magnitude in energy.

Using the fluorescence detectors (FD), telescopes which observe air showers that are developing above the SD, we were able to characterize the increase in efficiency of the array to detect cosmic rays. For arrival directions within 40 degrees of the zenith, the array is >98% efficient at detecting cosmic rays above 100 PeV, the energy at which other experiments have observed the second knee.

The FD also plays a critical component in this analysis as this is how we are able to assign energies to the events we detect with the surface array. The sparsely distributed network of detectors which make up the SD-750 are suitable for measuring the size of the shower, but not the energy directly. To estimate the size of an air shower, we use a parameter, called S(450), which is defined to be the signal one would expect to measure for a tank that is 450 m from the central axis of the air shower. The value of S(450) is also corrected for other various systematic effects to increase the precision of the energy assignment. This includes effects like the decreasing observed shower size that one expects for more inclined showers which must traverse a larger amount of atmosphere and the impact of the local weather on the development of air showers in the atmosphere. Finally, we perform a direct calibration between the corrected shower sizes and the energies observed by the FD using air-shower observations which were independently reconstructed by the SD and FD. 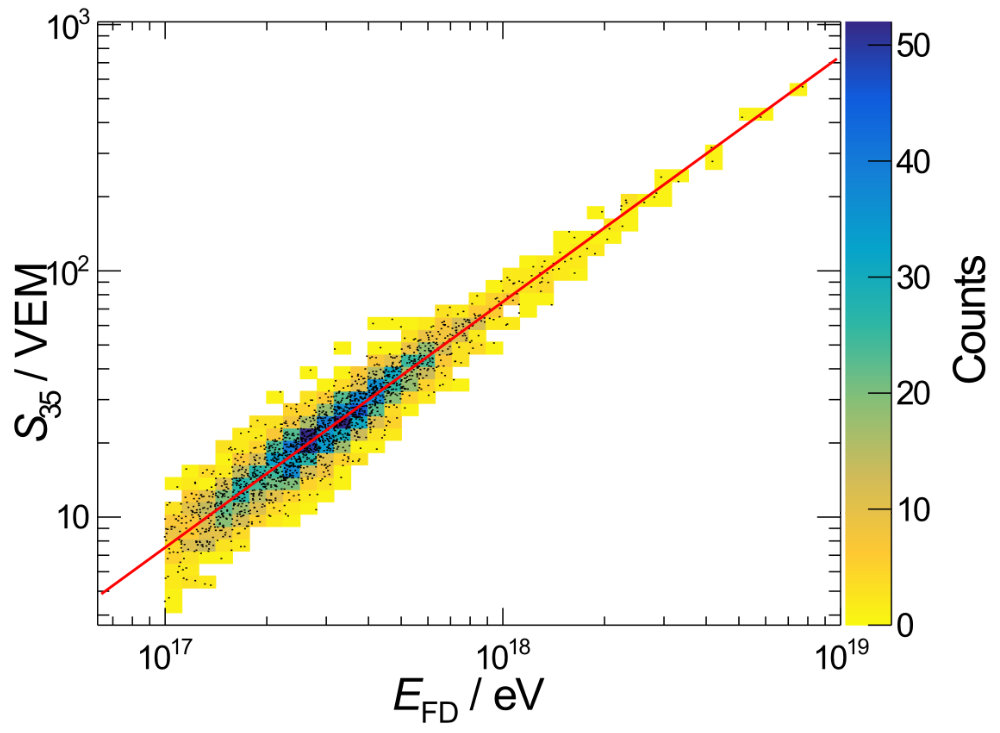 Figure 7: The energy scale of the SD is set via a calibration with the FD. A set of about 2000 air showers, which could be independently reconstructed using the two detectors were used. The relationship between the shower size estimator, S35, and the energy assigned by the FD is approximately linear.

Using events observed by the SD-750 between July 2014 and Aug 2018, we made a measurement of the cosmic ray spectrum. 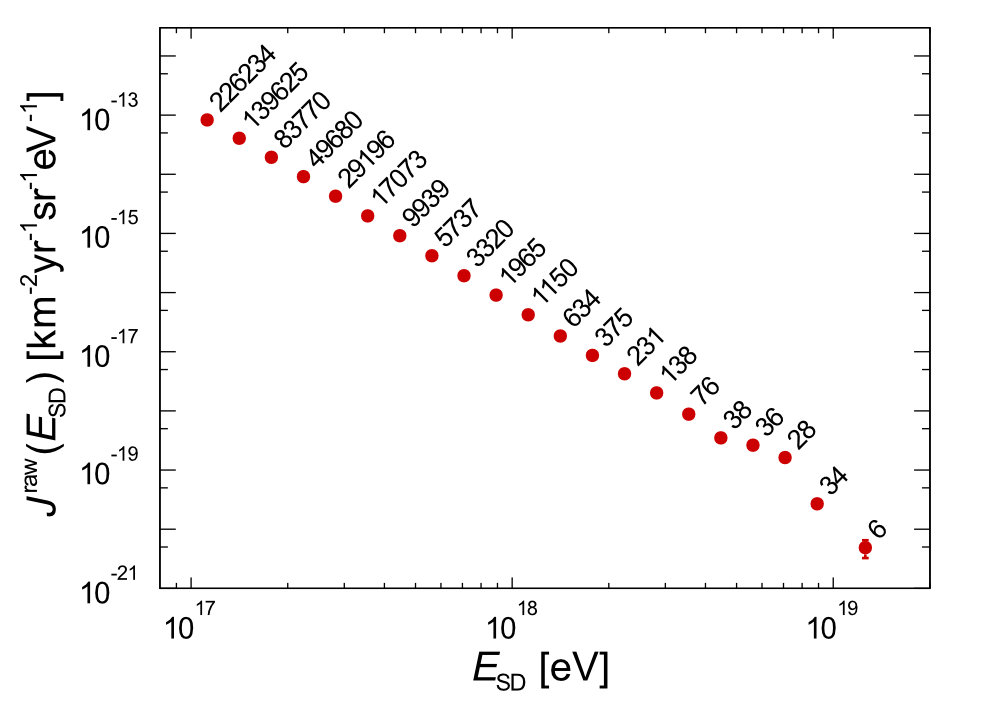 Figure 12: The flux of cosmic rays that have been observed using the SD-750 is shown. Approximately 560,000 events with zenith angles less than 40° were used in this analysis.

During this time, we accumulated an exposure of 105 +/- 4 km^2 sr yr and observed about 560k events. This measurement begins where the second knee is reported to begin. So while we cannot make a precise measurement of its location in the spectrum, we are able to make a statistically powerful measurement of the shape of the spectrum in this region. 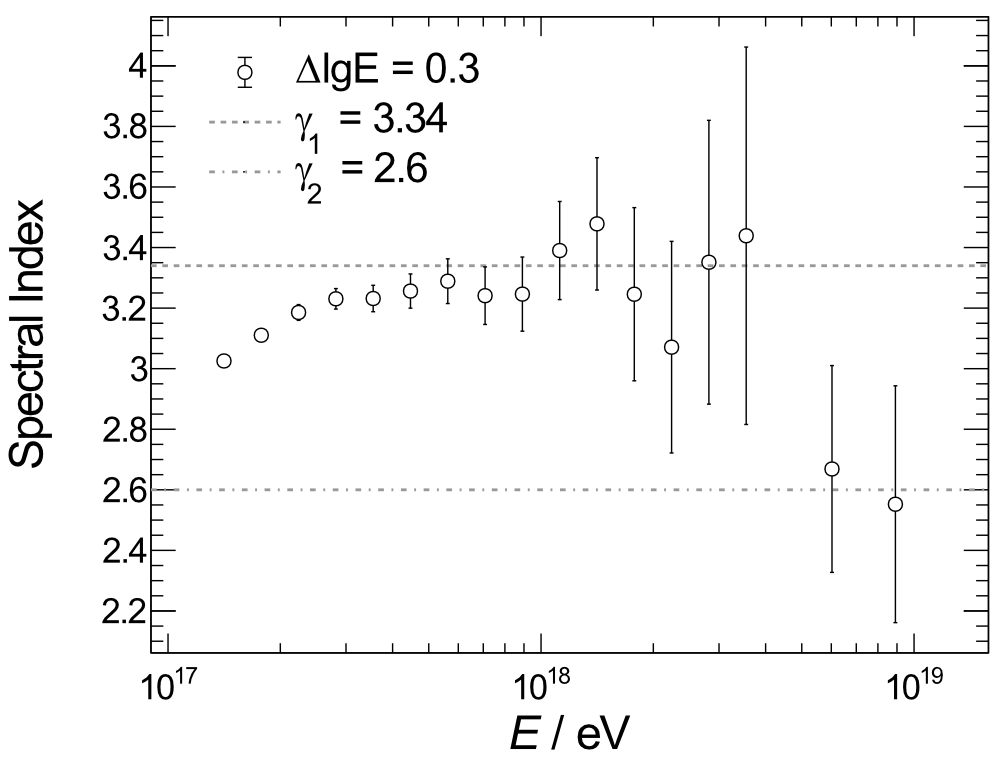 Over the energy range of this measurement, we see a rapid change in the spectral index, characterizing the bend in the spectrum followed by a return to a power law with γ = 3.3, leading up to the ankle.

To obtain a complete picture of the spectrum across the entire energy range that is observed at the Observatory, we finally made a combination of the spectrum from the SD-750 with that of the larger SD array with 1500m spacing, SD-1500. This measurement covers the energies above 3 EeV which includes the ankle and instep features. The combination was performed via a statistical analysis which combines the numbers of events seen by each array as a function of energy as well as the respective resolutions and energy calibrations. 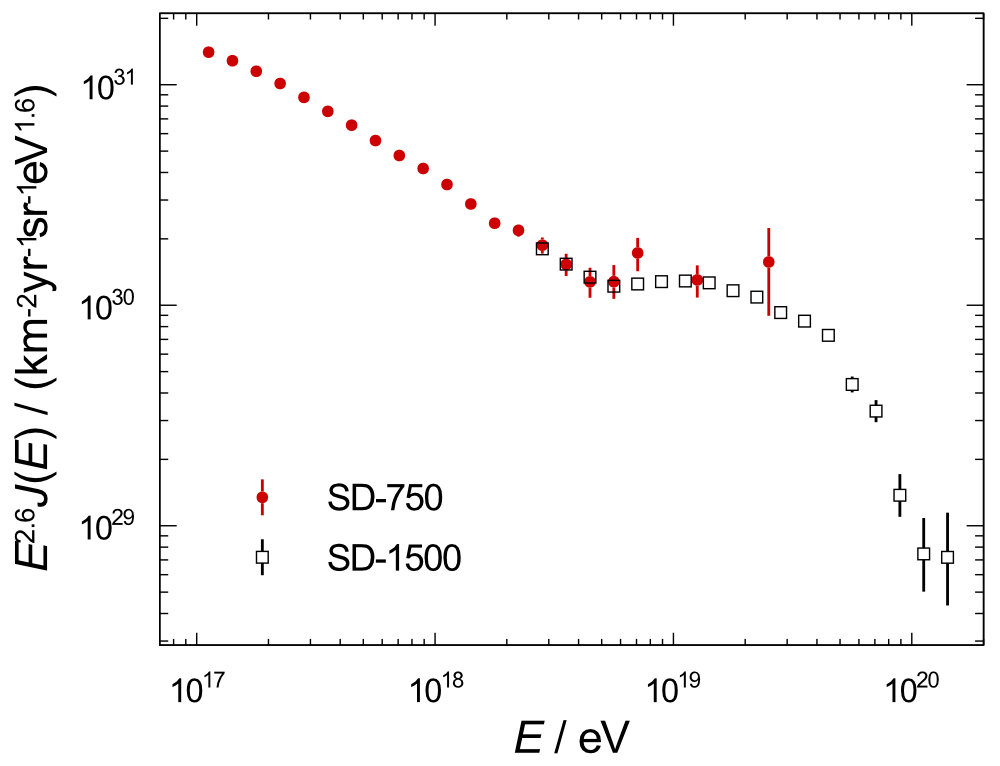 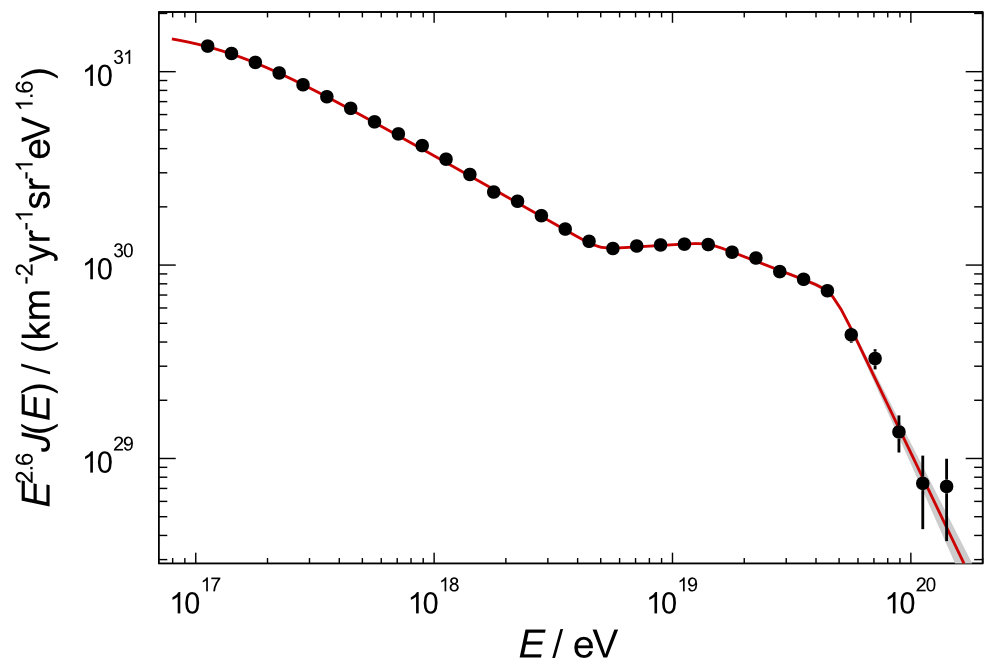 Figure 16 and Figure 17: To gain a full picture of the cosmic ray spectrum at the highest energies, we combined this measurement with that of the SD-1500, which we have measured using very similar techniques.

The complete picture is shown above scaled by E^2.6 to emphasize the various inflection points in the spectrum.