A Detector Thirty Times the Size of Paris

Each second, about 200 cosmic ray particles with energies of a few million electron volts strike every square meter of the earth. While these low-energy cosmic rays are plentiful, cosmic rays at higher energies are far rarer. Above the energy of 1018 eV, only one particle each week falls on an area of one square kilometer. Above the energy of 1020 eV, only one particle falls on a square kilometer in a century! To find and measure these rare events, a high-energy cosmic ray study needs a truly giant detector.

Direct observation of cosmic rays is possible only above the earth's atmosphere. High-energy cosmic rays are so rare, though, that it would be impossible to lift into space a detector big enough to capture a significant number of them, so we must find ways to detect them at the earth's surface. When cosmic ray particles strike the earth's atmosphere, collisions with air molecules initiate cascades of secondary particles. These "air showers," often containing many millions of particles, fall to earth over a large area. When they reach the surface of the earth, the particles from an air shower initiated by a 1020 eV cosmic ray may cover an area of 16 square kilometers.

The atmosphere absorbs the great energy of the cosmic ray particles by producing air showers and also makes it possible to detect and measure them. In effect, nature provides scientists with most of the experimental apparatus -- in the form of the atmosphere -- needed to detect cosmic rays. By measuring two different features of an air shower, scientists at the Pierre Auger Cosmic Ray Observatory will be able to determine the direction and energy of the original incoming cosmic ray particle.

The Shower and the Glow 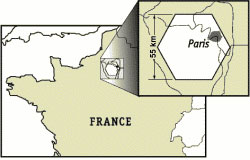 In the first part of the detection system, 1,600 particle detector stations will form a giant regular array, or grid, covering about 3,000 square kilometers, an area about ten times the size of Paris. The detector stations will be about 1.5 km apart, each one an 11,000-liter (3,000-gallon) tank filled with 12 tons of pure water. Each station will be self-contained and will operate on solar power. Instruments in each station will measure the number of particles passing through. Shower particles from a high-energy cosmic ray will reach several stations at the same time. When particles strike a station, a small computer will confer by radio with computers in a central data center to decide whether the particles are part of a large shower. If so, information about the shower will be transmitted to the data center. Computers at the data center will combine the measurements of the number of particles and their time of arrival at each station to determine the direction and energy of the original cosmic ray that set off the shower. The detector will measure about 30 cosmic ray events a year with energies above 1020 eV, along with large numbers of lower-energy ones. 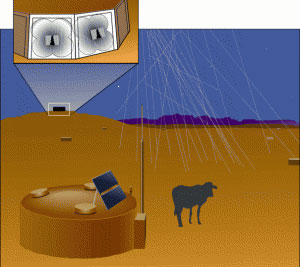 A second detection system will make use of the faint glow caused by the collisions of shower particles with air molecules during cosmic ray air showers. On clear, moonless nights, finely tuned light sensors can measure this fluorescence. A collection of light sensors pointing around the sky in all directions makes an effective air shower detector, observing an air shower as a trace of light across the sky. The total amount of light depends on the number of particles in the shower and, in turn, on the energy. The shape and direction of the light trace help determine the cosmic ray's direction and indicate what kind of particle the original cosmic ray might have been. The Cosmic Ray group at the University of Utah, which developed this technique, calls their fluorescence detector a "fly's eye," because the many clustered light sensors are like the facets of a fly's eye.