When an ultrahigh-energy cosmic ray impacts the Earth’s atmosphere, it can generate an enormous cascade of billions of energetic particles capable of reaching the ground.

Such a cascade is dubbed an “extensive air shower” (EAS) and is routinely being detected by the Pierre Auger Observatory in Argentina near the city of Malargüe, using an array of surface detectors deployed over 3000 km2. Variations of the atmospheric conditions such as the pressure (P), temperature (T) or air density (ρ) all affect the development of such extensive air showers. The surface detectors of the Auger Observatory are installed on a triangular grid of 1500 m spacing, with a nested denser array with 750 m spacing. The detectors are overlooked by four fluorescence telescopes operated on dark clear nights. Several weather stations are in operation at the Auger Observatory to monitor the atmospheric conditions, four at the different sites of the fluorescence telescope buildings and one near the laser facility close to the center of the 1500 m array. 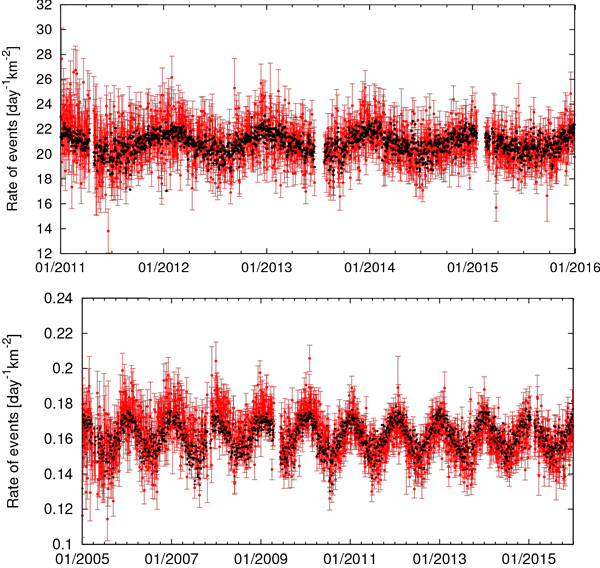 The most convenient way to study the atmospheric effects on EAS development is by considering as variables the pressure and the air density. The latter is approximately determined from the values of P and T through the dry air relation ρ = 0.3484P/(T+273.16) kg m-3, with P in hPa and T in ºC, with the humidity having only a sub-dominant effect in the density near the ground. The daily-averaged density changes by about ±6% during the year, while the changes within a single day can be ±3% (corresponding to temperature changes of ±8 ºC). The pressure is also subject to a small  seasonal modulation, with variations that are more pronounced in winter times than during the summer. On a daily basis, the pressure at the Malargüe site is found to have generally a minimum in the afternoon, and a less pronounced local minimum in the early morning, and is moreover significantly modulated by the movement of cold fronts and storm activity at the site, which are more frequent during winter times.

The pressure, which essentially measures the density of the vertical column of air, determines the “age” of the shower when it reaches the ground. Consequently, its variations affect the observed signals because of the attenuation of the longitudinal shower profile. On the other hand, variations of the air density affect (via the so-called Molière radius) the lateral spread of the air shower due to multiple Coulomb scattering of its electromagnetic particles. Additionally, the electromagnetic signal measured at the ground results typically from particles produced at heights of about 500 m to 1 km above the ground. At such altitudes the daily amplitude of the temperature variations are smaller than at the ground. There is also a delay of about two hours in the response of the atmosphere to changes in temperature produced by the heating or cooling of the ground. The dependence of the detector signals on the atmospheric conditions leads to a modulation of the rate of recorded events above a given threshold. This is exploited to obtain, through a maximum likelihood fit procedure, parameters that allow for a correction of the reconstructed signals, and subsequently an estimation of the energy of the parent cosmic ray.

Average hourly measured rates and expectations from the fit including the two-hour delay (squares) or with the actual density (triangles), with their residuals.

Related paper:
Impact of atmospheric effects on the energy reconstruction of air showers observed by the surface detectors of the Pierre Auger Observatory
The Pierre Auger Collaboration
[arXiv:1702.02835]