100 years after their prediction by Albert Einstein, Gravitational Waves (GW) were detected in 2015 by the LIGO detectors. 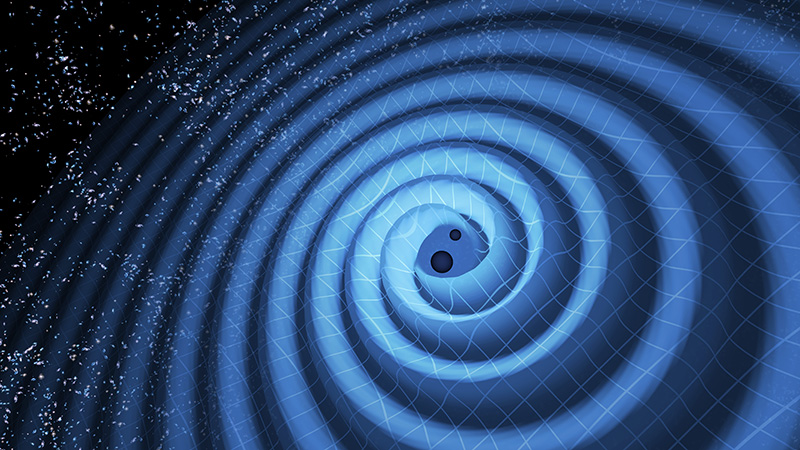 This illustration shows the merger of two black holes and the gravitational waves that ripple outward as the black holes spiral toward each other. (credit: LIGO/T Pyle)

With the surface detector of Auger we have searched for ultrahigh-energy neutrinos in temporal and spatial coincidence with such remarkable events.

100 years after their prediction by Albert Einstein, Gravitational Waves (GW) were detected on September 14, 2015 and on December 26, 2015 by the two advanced LIGO detectors. The inferred source of both events is the coalescence of a stellar mass binary black hole system at cosmological distances. It has been speculated that these sources may provide a potential environment where cosmic-rays can be accelerated to ultrahigh energies provided there are magnetic fields and disk debris remaining from the formation of the black holes. Such a system may also emit ultrahigh-energy gamma-rays and neutrinos. If GW events occur at distances farther than a few tens of Mpc, neutrinos are the only messengers at EeV energies capable of probing their sources.

With the surface detector of Auger we have searched for ultrahigh-energy neutrinos in temporal and spatial coincidence with such remarkable events. No candidates were found after applying the Auger neutrino identification criteria of the Earth-skimming and downward -going channels within +/- 500 s and 1 day after the coalescence. For the first time upper limits to the energy emitted in the form of EeV neutrinos from the merger of black hole binaries are obtained. The best limits from Auger data restrict this energy to roughly half a solar mass, corresponding to a fraction of the energy radiated in GW.