Search for photon point sources at the Pierre Auger Observatory

One of the most pressing mysteries in astroparticle physics is the composition and origin of cosmic rays at energies around 1 EeV = 1018 eV.

In contrast to charged particles, deflected in galactic and extragalactic magnetic fields, neutral particles such as neutrinos, neutrons, or photons point back to their production site. One way to learn more about sources of ultra-high energy cosmic rays is therefore to search for an accumulation of events from specific directions. This is akin to astronomical observations of a distant galaxy, say, made with an optical telescope collecting photons of visible light. 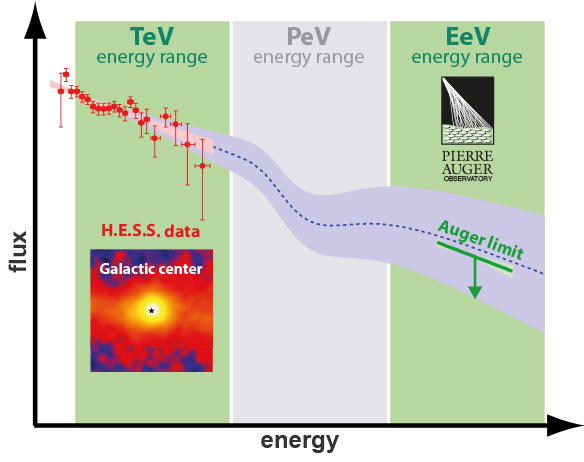 This illustration  shows the connection between measurements of the galactic center region from the H.E.S.S. observatory in the TeV energy range and the derived flux upper limit  from the Pierre Auger Observatory in the EeV energy range. A naive extrapolation of the measured photon flux is shown as dashed blue line. (credit: modified version of Fig. 2 in the paper/the H.E.S.S. measurement is from Abramowski, A. et al. 2016, Nature, 531, 476)

The Pierre Auger Observatory makes use of two techniques to detect giant air showers of particles created in the atmosphere by the incident  cosmic particle.   A surface detector covering 3000 km2 samples the air- shower particles when they reach the ground. Independently, fluorescence telescopes detect the faint sky glow engendered by these air showers on dark clear moonless nights. Using air-shower events recorded by both the fluorescence and surface detector simultaneously (hybrid measurement) we have searched for an accumulation of photon-like  events in the EeV energy range from specific target directions, using a multivariate  selection procedure. Typically, photon-induced extensive air showers develop deeper in the atmosphere and exhibit fewer muons compared to hadronic primaries (atomic nuclei)  of the same energy.  The Pierre Auger Observatory provides an excellent environment to search for these rare signatures. With  the Observatory’s unprecedented exposure and ability  to measure simultaneously the longitudinal development with fluorescence telescopes and the footprint on the ground with water-Cherenkov stations, we can reconstruct air showers with a directional accuracy < 1° .

The recent publication focuses on 12 galactic and nearby extragalactic target sets, each set being a class of possible sources of high-energy photons. No target class reveals compelling  evidence for photon emitting sources in the EeV energy regime. This non-observation  leaves open the possibility that the proton-like component in the EeV energy range, as observed at Earth, is of extragalactic origin. Furthermore, particle flux upper limits are reported from selected candidate  sources such as the galactic center region. This is of particular interest after the recent indication of accelerated PeV (1 PeV = 1015 eV) protons from this region by the H.E.S.S. gamma-ray observatory. These limits connect, for the first time, measurements of sources in the TeV energy range to the highest energy regime, constrain the allowed parameter space for a flux continuation to EeV energies and place upper limits on the cutoff energy of sources.