In a recent publication, the Pierre Auger Collaboration has presented the design, implementation and applications of the “FRAM” robotic telescope used for atmospheric calibration at the Pierre Auger Observatory.

The Fluorescence Detector of the Pierre Auger Observatory detects the near-ultraviolet light produced when a shower of charged particles produced by an ultra-high energy cosmic ray travels through the atmosphere. Even though this light is extremely faint, the sensitive fluorescence telescopes can see showers up to several tens of kilometers away. When traveling over such large distances, the light is significantly affected by the atmosphere – it can be outright hidden by clouds or just attenuated by aerosols. As the Pierre Auger Observatory is located outdoors, outside of the controlled environment of the more conventional particle physics experiments, the properties of the atmosphere naturally change and thus must be constantly monitored. The main tool that is being used at the Pierre Auger Observatory for this purpose is lasers – powerful beams of light that provide a reference light source high in the atmosphere that can be observed by dedicated detectors (as in the case of the LIDARs) or by the fluorescence telescope themselves.

Figure 1: The apparent trajectory of an extensive air shower can be described by several geometric parameters (left) that are then passed to FRAM, where a series of observation fields (right) is generated in order to cover the  trajectory across the whole FD field of view between 1.5 and 31.5 degrees of altitude as well as the direction of the arrival of the shower as a serendipity observation for the case that the cosmic ray was associated with a transient phenomenon.

However, shining a laser in the sky is always at least partially disruptive to the observations of the Fluorescence Detector, which is why the Pierre Auger Observatory has pioneered a non-invasive method of atmospheric monitoring, which uses stars as reference light sources to probe the transparency of the atmosphere. To this end, the FRAM (short for F/Photometric Robotic Atmospheric Monitor) robotic telescope has been built at the Los Leones fluorescence station, already in 2005 and used as a test-bed for the development of the methods for atmospheric monitoring using stellar photometry. To achieve precision in the determination of atmospheric transparency comparable to that of the laser-based methods, many subtle issue, related both to the properties of the detector and of the stars themselves, had to be addressed and the FRAM setup has undergone several iterations. 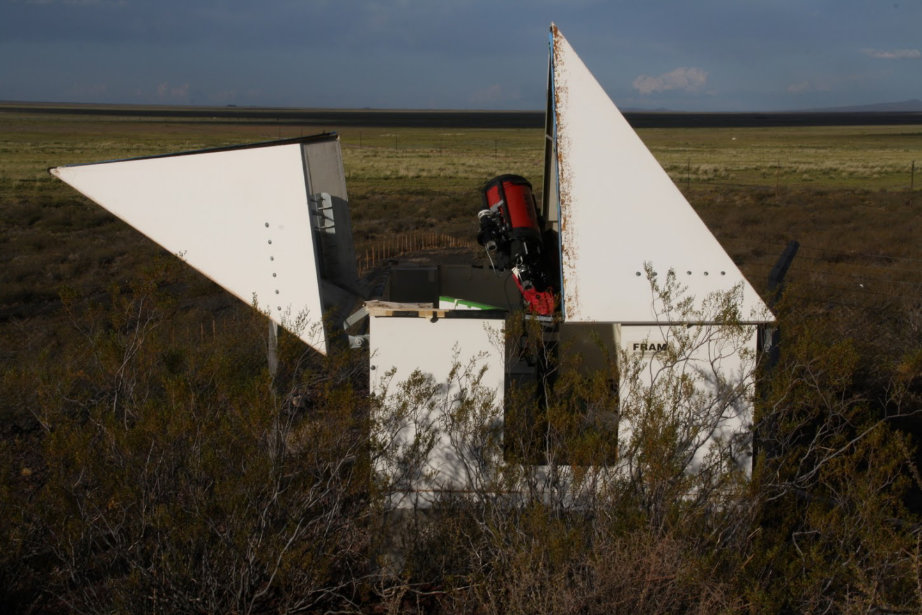 Figure 2: The FRAM enclosure with one half open and one closed. Inside is an older version of the FRAM setup with the Meade SCT and Paramount ME mount.

Currently, the main task assigned to the FRAM at the Pierre Auger Observatory is that of the “Shoot-the-shower” observations. In this program, each cosmic ray showers observed by the Los Leones fluorescence station is quickly analyzed by near-real-time reconstruction algorithm and sky coordinates of any showers with profiles deviating from the expected shape are passed to the FRAM telescope for immediate observation in the relevant area of the sky. The FRAM is capable of detecting even the tiniest clouds which could have affected the shape of the shower profile – if it doesn’t detect any, the shower is then considered a candidate for the class of “anomalous showers”. Those are actually predicted by current models and their properties can be used to constrain shower physics – but only if we are really sure that the anomaly is not due to some clouds that have evaded other atmospheric monitoring devices.

A secondary application of the FRAM method lies in the measurement of the amount of aerosols in the air. At the Pierre Auger, this goal is satisfactorily accomplished by the laser-based methods, but the FRAM measurements can serve as a check on the calibration of those methods, as the sources of systematic errors are very different for the two methods. Additionally, the FRAM data can be used to determine spatial and temporal changes in the aerosol content of the air, because the non-invasiveness of the method allows for a much more detailed study of those properties, when using the FRAM. The capability of the FRAM method to measure aerosols without producing unnecessary light has already found applications outside of the Pierre Auger Observatory – several FRAM devices are planned as crucial parts of the atmospheric monitoring system of the Cherenkov Telescope Array (CTA), the next generation ground-based gamma-ray observatory and their prototypes have been already deployed to the future CTA sites for a site characterization campaign. This shows that the technical developments achieved at the Pierre Auger Observatory have impact on the whole field of astroparticle physics.