A world-record sensitivity on the flux of ultrarelativistic magnetic monopoles

Maxwell’s unified description of electric and magnetic phenomena is one of the greatest achievements of 19th century physics. 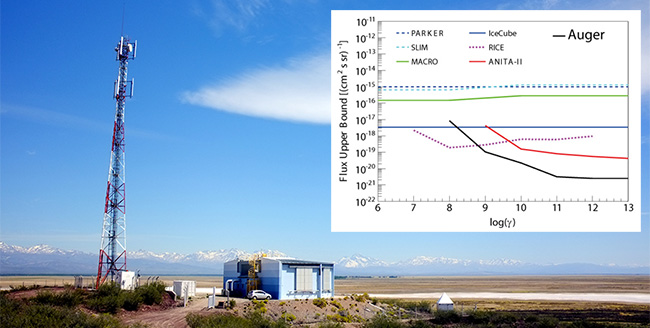 Free magnetic charges and currents are not allowed in Maxwell’s equations, a consequence of their apparent absence in Nature. However, their existence would naturally explain the quantization of electric charge, as first noted by Dirac in 1931.

In this paper, we report a search for ultrarelativistic magnetic monopoles with data collected with the Pierre Auger Observatory in Mendoza Province, Argentina, with an array of detectors covering an area of 3000 km2.  The Observatory is equipped with telescopes at four sites along the periphery of the detector array, and a fluorescence telescope station is depicted in the figure. On dark clear moonless nights the telescopes are used to view the nitrogen fluorescence produced in giant air showers of billions of particles, induced when ultrahigh-energy cosmic rays impinge upon the atmosphere. The magnetic monopole search is motivated by the large amount of energy expected to be deposited when passing through the atmosphere. This energy deposit can be compared to that of the enormous air showers induced by ultrahigh-energy cosmic rays, with a distinctive longitudinal development well-suited for detection by the fluorescence telescopes. Using a blind search predicated on the expected distinctive longitudinal profile of the monopole-induced activity in the atmosphere, no candidate was found in the data collected between 2004 and 2012, with an expected background of less than 0.1 event from the cosmic rays themselves. The search therefore results in 90% confidence level upper limits on the flux of ultrarelativistic magnetic monopoles as shown in the figure, that range from 10−19 (cm2 sr s)−1  for a Lorentz factor γ = 109 to 2.5 × 10−21 (cm2 sr s)−1  for γ = 1012 . These results – the first obtained with a detector of ultrahigh-energy cosmic rays –  improve previously published limits (also depicted in the figure) by up to an order of magnitude. While magnetic monopoles may exist, they are very rare indeed!