The analysis of the radio data requires a very precise time-synchronisation between the individual radio detector stations. The GPS-clocks built into the AERA stations only provide a resolution of about 10 ns, whereas 1-2 ns is needed.

For this purpose, we conceived and installed a reference transmitter ("beacon") whose signals are recorded within the AERA data stream. Based upon these measurements the timing of each station is adjusted. But how can we independently check if this technique really achieves the precision we need? 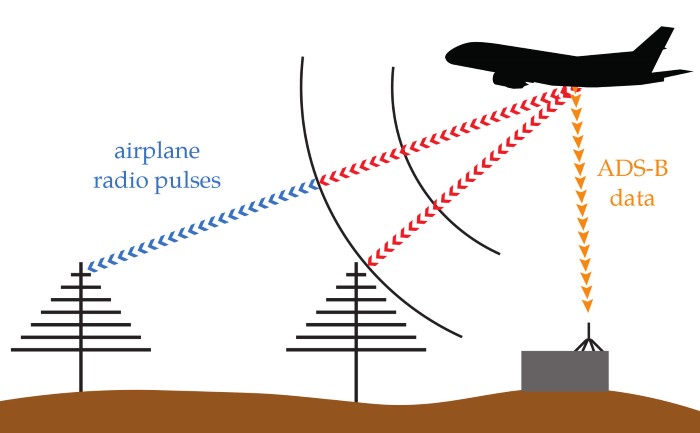 Concept of the time calibration using commercial airplanes. The airplane broadcasts its position via digital ADS-B packets at 1090 MHz. These signals are received and interpreted by a dedicated setup in the AERA field in real time. In addition, (some) commercial airplanes emit pulsed signals in the frequency range of 30–80 MHz recorded by the AERA detector stations.

Enter commercial airplanes. Airplanes emit radio pulses in the 30-80 MHz observing window of AERA. It is unknown what causes these pulses, probably some unintended emission. Not all airplanes emit them. Still, if we know the exact position of the airplane at the time of the emission, we can calculate the arrival times of these pulses at the AERA detector stations, and compare them with the actual measured arrival times. This way, we can calibrate clock offsets and thus independently check the performance of the "beacon method".

Airplanes transmit their real-time position digitally, as part of Automatic Dependent Surveillance Broadcasts (ADS-B) at a frequency of 1090 MHz. These transmissions can be intercepted with a system consisting of a simple antenna and a DVB-T stick, normally used for receiving digital TV with a personal computer, available for a total of only 20 US$. These TV receivers do most of the signal decoding in software ("software-defined radio"), and hobby enthusiasts have published software to decode the ADS-B data sent out by airplanes instead of the TV signals. Using a modified version of this software we detect approaching airplanes in real time and notify our data acquisition system to record pulses from these. An offline analysis then reveals that indeed, the combination of real-time airplane position and received airplane radio pulses can be used to validate the "beacon method". Both methods combined give a time resolution of ~2 ns, so the "beacon method" alone may well achieve the aimed-for 1 ns time resolution.