A search for cosmic-ray sources with IceCube, the Pierre Auger Observatory, and the Telescope Array

High-energy neutrinos are thought to be excellent cosmic messengers when exploring the extreme universe.

They don’t bend in magnetic fields as cosmic rays (CRs) do and they are not absorbed by the radiation background as gamma rays are. However, it turns out that the deviation of some CRs, namely protons, is expected to be only a few degrees at energies above 50 EeV. This opens the possibility for investigating common origins of high-energy neutrinos and CRs.

In a new study by the IceCube, Pierre Auger, and Telescope Array Collaborations, scientists have looked for correlations between the highest energy neutrino candidates in IceCube and the highest energy CRs in these two cosmic-ray observatories. The results, submitted today to the Journal of Cosmology and Astroparticle Physics, have not found any correlation at discovery level. However, potentially interesting results have been found and will continue to be studied in future joint analyses. 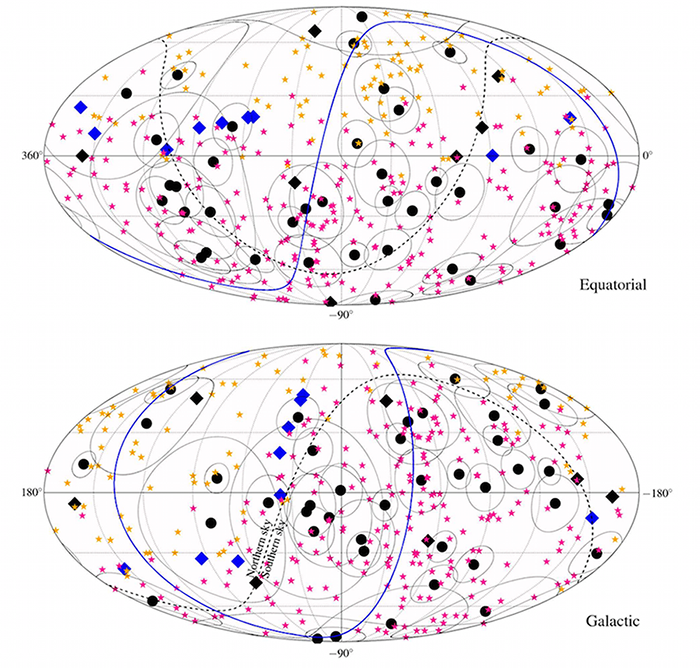 Maps in Equatorial and Galactic coordinates showing the arrival directions of the IceCube cascades (black dots) and tracks (diamonds), as well as those of the UHECRs detected by the Pierre Auger Observatory (magenta stars) and Telescope Array (orange stars). The circles around the showers indicate angular errors. The black diamonds are the HESE tracks while the blue diamonds stand for the tracks from the through-going muon sample. The blue curve indicates the Super-Galactic plane. Image: IceCube, Pierre Auger and Telescope Array Collaborations.

The IceCube astrophysical neutrino flux is consistent with an isotropic distribution, which suggests that most neutrinos have an extragalactic origin. The intensity of this flux is also found to be close to the so-called Waxman-Bahcall flux, which is the rate assuming that ultra-high-energy CRs (UHECRs) are mainly protons and have a power-law

spectrum. In this scenario, primary cosmic rays collide to a significant extent with photons and neutrons within the source environment, resulting in mainly protons escaping from these sources.

The UHECRs detected by the Pierre Auger Observatory (Auger) and the Telescope Array (TA) that were used in this study have energies above 50 EeV, since at the highest energies cosmic rays are deflected the least. UHECRs produce neutrinos that carry only 3-5% of the original proton energy, i.e., neutrinos that would have energies of at least several hundred PeVs for the CR sample of this work. However, we expect that the sources of these UHECRs will also produce lower energy CRs, which would then produce neutrinos in the energy range—30 TeV to 2 PeV—observed in IceCube. And this is the idea behind this search: to look for a statistical excess of neutrinos in IceCube from the direction of cosmic rays in the Auger and TA and, thus, their sources.

Not a simple search, but definitely worth trying to study since searches for the most obvious potential CR sources using IceCube neutrinos have not been successful so far. The major challenges of this search are: i) CRs do not precisely point to their sources, and our knowledge of the deviations produced by the galactic magnetic fields is limited; ii) cascade neutrino events—mainly produced by electron and tau neutrinos—in IceCube are characterized by large angular uncertainties; and iii) IceCube neutrino candidates include background muon events due to the interaction of CRs with the Earth’s atmosphere.

Researchers have used three different analyses to tackle these challenges. They first searched for cross-correlations between the number of CR-neutrino pairs at different angular windows and compared them to expectations for the null hypothesis of an isotropic UHECR flux. Then, they used a stacking likelihood analysis that looked for the combined contribution from different sources. These two searches used both cascade and track neutrino events from the astrophysical neutrino fluxes measured in IceCube (HESE and high-energy throughgoing muons). IceCube track neutrino signatures are produced by charged-current interactions of muon neutrinos and have an angular uncertainty of less than one degree. Finally, they performed a third study, a stacking search using the neutrino sample used for the four-year point-source search in IceCube, which includes track neutrino candidates only.

The results obtained are all below 3.3 sigma. There is a potentially interesting finding in the analyses performed with the set of high-energy cascades. When compared to an isotropic flux of neutrinos (fixing the positions of the cosmic rays) to consider the effect of anisotropies in the arrival directions of cosmic rays, the significance is 2.4 sigma for the cross-correlation analysis. These results were obtained with relatively few events and the collaborations will update the analyses in the future with additional statistics to follow their evolution.