In the second paper of a series of two devoted to the search for Ultra-High Energy (UHE) neutrinos at the Pierre Auger Observatory, the Pierre Auger Collaboration has addressed the sensitivity of the Surface Detector array (SD) to steady and transient point sources of UHE neutrinos as a function of declination.

It is known (see paper 1) that the SD is sensitive to neutrinos with energies above 0.1 EeV arriving from directions in the sky with zenith angles between 60 deg. and 95 deg. with respect to the vertical to ground. This implies that at each instant of time the SD is sensitive to UHE neutrinos from roughly 30% of the sky (Fig. 1). When integrated over a sidereal day, point-like sources across the sky from close to the Southern Celestial Pole up to 60 deg. in equatorial declination can be observed. In particular with Auger we are sensitive to UHE neutrinos arriving from the Northern terrestrial hemisphere, a region that at is hidden at EeV energies to other observatories such as IceCube located at the South Pole because neutrinos of those energies are absorbed in the Earth. 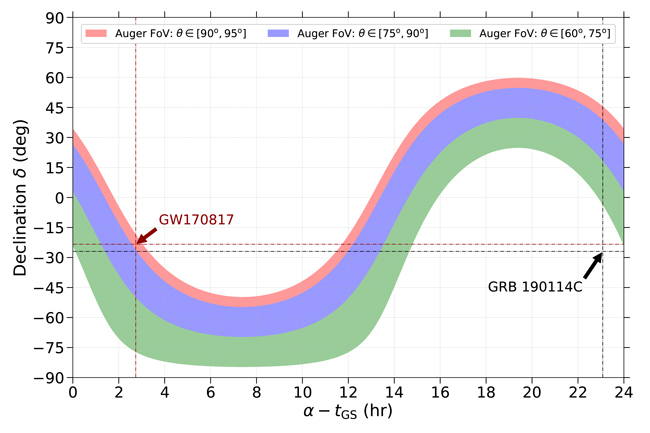 Fig.1: Instantaneous field of view of the Pierre Auger Observatory for neutrinos in different zenith angle ranges. For any given right ascension α, the instantaneous declination range for neutrino search at 00:00 Greenwich Standard Time (tGS = 0) can be read at a value α of the abscissa. At any other tGS, the corresponding declination range is simply read at a value α - tGS. Two examples of transient sources are shown: the gravitational-wave event from a binary neutron star GW170817, visible in Auger in the directions close to the horizontal at the time of emission, and GRB 190114C not visible in Auger in the inclined directions at the time of the burst.

The absence of neutrino candidates in approximately 14.7 years of data taken up to 31 August 2018 has allowed us to put stringent upper limits to the neutrino flux from point-like and steady sources (assumed to emit UHE neutrinos continuously) as a function of source declination (Fig.2). The sensitivity peaks at declinations around -53 deg. and +55 deg. because these regions in the sky are visible in the most sensitive Earth-skimming tau neutrino channel Auger for the largest fraction of time each day. 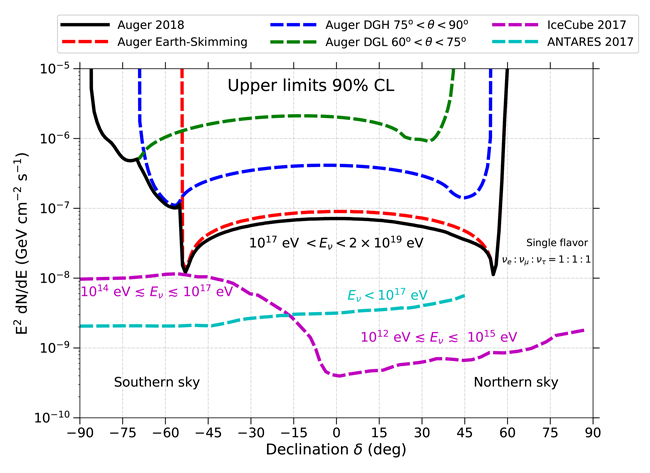 Fig.2: Pierre Auger Observatory upper limits (1 Jan 2004 - 31 Aug 2018) on the normalization of a single-flavour point-like and steady flux of UHE neutrinos (E-2 differential in energy) as a function of source declination. The limits for IceCube (2008 - 2015) and ANTARES (2007 - 2015) are also shown. Note the different energy ranges where the limits of each observatory apply.

For transient sources, in addition to the declination dependence, the sensitivity is crucially dependent on the efficiency of the detection during the time interval of the occurrence of the transient, and hence on the inclination of the event in the local coordinate system of the Observatory. It is shown that the sensitivity, quantified in terms of the effective area of the SD (Fig. 3), can exceed by far that of other neutrino detectors such as IceCube, most prominently for sources slightly below the horizon. This is particularly interesting because the gravitational-wave event GW170817, the only confirmed binary neutron star merger to date, happened to be just below the horizon as seen from the Auger site. 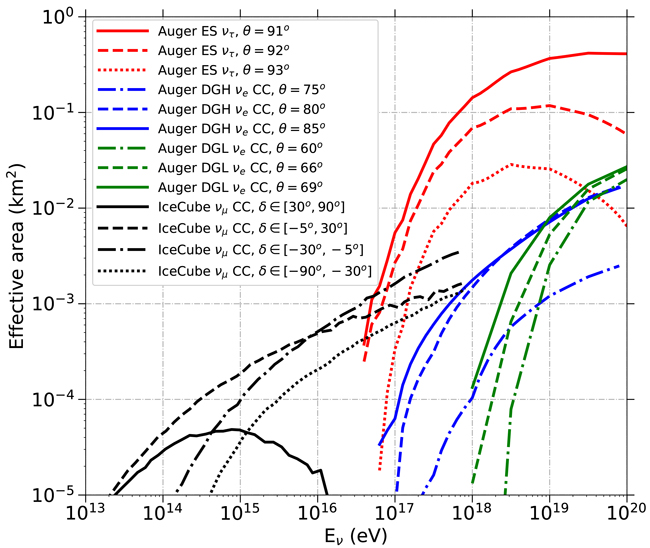 Fig. 3: Instantaneous effective areas of the SD of Auger to neutrinos (coloured lines) arriving from various zenith angles, compared to the areas of IceCube (black). Note that for IceCube, at a latitude λ = -90°, the zenith angle q and the declination δ are related by θ = 90° + δ.

These results imply that the Pierre Auger Observatory is in an excellent position to contribute to the new era of multimessenger astronomy, by looking for neutrinos in the EeV range in correlation with the detection of gamma rays or gravitational waves.