What is the best match for an ultra energetic cosmic ray?

The Pierre Auger Collaboration finds an indication that some galaxies may be better partners of cosmic rays at the highest energies than others.

In September 2017, the Pierre Auger Collaboration reported the first observational evidence that cosmic rays originate from much further away than our Galaxy, by studying more than 30,000 cosmic rays with energies greater than 1 Joule. At higher energies, the rate of the arrival of cosmic rays on top of the atmosphere drastically drops, but deflections are expected to be smaller, so that their arrival directions could possibly point closer their homeland. By studying the arrival direction of nearly 900 cosmic rays with energies larger than 6 Joules (39 x 10¹⁸ eV), it is found that about 10% of those cosmic rays cluster within 13° of the directions of starburst galaxies.

The team focussed its attention on two types of extragalactic accelerators which are detected using gamma rays with GeV-TeV energies (10⁹-10¹² eV): active galactic nuclei, which harbour a supermassive black hole and powerful jets, and starburst galaxies, which undergo an episode of exceptionally high rate of star formation. For comparison, larger surveys of galaxies emitting infrared and X-ray radiation, with no discrimination on the galaxy type, were also investigated as tracers of the distribution of extragalactic matter. The pattern on the sky expected from these four test samples of galaxies is shown in Figure 1.

By mixing the maps in Figure 1 with a variable fraction of isotropy, for various search radii around the test sources and accounting for the directional coverage of the Pierre Auger Observatory (85% of the sky), the largest deviation from isotropy was found for starburst galaxies, with a chance probability of about four in one hundred thousand (4.0 σ). Starburst galaxies appear to be better partners to ultra-high energy cosmic rays than the three other lists of candidates, with odds ranging from five in a thousand (2.6 σ for the X-ray survey) down to one in ten thousand (3.7 σ for active galactic nuclei detected in gamma rays). The arrival directions of cosmic rays above 6 Joule are compared, after subtraction of the isotropic component, to the pattern expected from starburst galaxies accounting for the directional coverage of the Observatory. 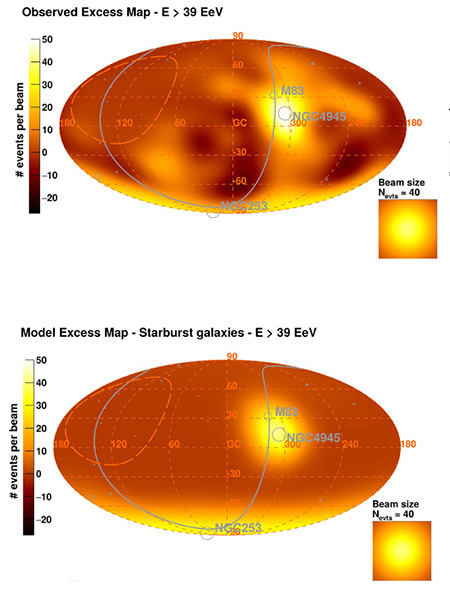 Figure 2
Top: Map of the arrival direction of cosmic rays above 6 Joules, smoothed on a 13° angular scale, the best-fit isotropic component having been subtracted.
Bottom: Map of the expected pattern from starburst galaxies accounting for the coverage of the Observatory.

Although starburst galaxies provide the strongest indication of an anisotropy at the highest energies to date, a better match could possibly still be found. The best angular scale of 13° is in line with values of 5-25° expected from deflections within the magnetic field of our Galaxy, but 90% of the observed events remain unaccounted for. Caution is further required in identifying starburst galaxies as the preferred sources prior to better understanding deflections of cosmic rays, which are subject to large uncertainties, in part due to the unknown charge of these particles. Teaming up with the Northern observatory Telescope Array to fully cover the celestial sphere, and exploiting the ongoing upgrade of the Pierre Auger Observatory, which will provide observables sensitive to the charge of each cosmic ray, may be decisive ingredients in finding a long-lasting partner to these elusive particles.

Related paper:
Indication of anisotropy in arrival directions of ultra-high-energy cosmic rays through comparison to the flux pattern of extragalactic gamma-ray sources
The Pierre Auger Collaboration; published in the Astrophysical Journal Letters on the 2nd of February.
[arXiv: 1801.06160][doi: 10.3847/2041-8213/aaa66d]