Spectral Calibration of the Fluorescence Telescopes of the Pierre Auger Observatory

To estimate the energy of any cosmic ray event detected by the Pierre Auger Observatory, the detectors have to be calibrated. 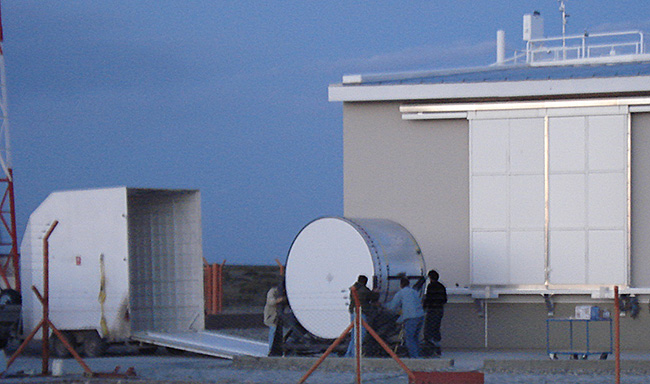 Figure 1: The calibrated light source (the drum) on its way to the telescopes

Ultrahigh-energy cosmic rays entering the Earth atmosphere interact with atoms from the air producing an Extensive Air Shower (EAS), a cascade of billions of particles reaching the ground level. By detecting those EAS, the arrival direction and energy of the cosmic ray are determined. The observatory consists of two complementary detector systems which provide independent information on the cosmic ray events: the Surface Detector (SD) and the Fluorescence Detector (FD). The SD is composed of 1660 water Cherenkov detectors located mostly on a triangular array of 1.5 km spacing covering an area of roughly 3000 km2. The SD measures the EAS particles reaching ground level. The FD is designed to measure the nitrogen fluorescence light produced in the atmosphere by the EAS charged particles. The FD is composed of 27 telescopes overlooking the SD array from four sites. The SD takes data continuously, but the FD operates only on clear moonless nights.

The energy of the primary cosmic ray is a key measurable for the science of the observatory, and the FD measurement of the energy, with lower independent systematic uncertainties, is used to calibrate the SD energy scale by analysing events observed by both detectors. To calibrate the FD three different procedures are performed: the absolute, the relative (every night), and the spectral (or multi-wavelength) calibrations. We focus here on the spectral calibration, which is a relative measurement that relates the absolute calibration performed at 365 nm to wavelengths across the spectral response of the telescopes (from 290 nm to 420 nm). To perform these measurements a portable calibrated light source (the drum) is carried to the FD building (see Figure 1) and placed at the aperture of the telescope (see Figure 2). 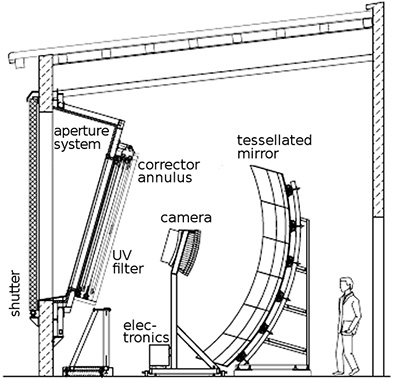 Figure 2: The optical components of an individual fluorescence telescope

The FD Telescopes have several optical components, as can be seen in Figure 2. The telescope response as a function of wavelength was initially calculated as a convolution of separate reflection or transmission measurements of each optical component used in the prototype telescopes. The first end-to-end spectral calibration of the FD was performed in 2006 using the drum light source with a xenon flasher and filter wheel to provide five points across the FD wavelength response, which represented an improvement for the energy estimation of all events observed by the Pierre Auger Observatory as it has been shown to increase the reconstructed energy of events by nearly 4% for all energies. However, that result has two limitations: first, the differences in FD optical components were not measured since only one telescope was calibrated; and second, determining the FD spectral response curve using only five points involved a complicated fitting procedure, and was particularly difficult considering the large width of the filters, which resulted in relatively large systematic uncertainties. 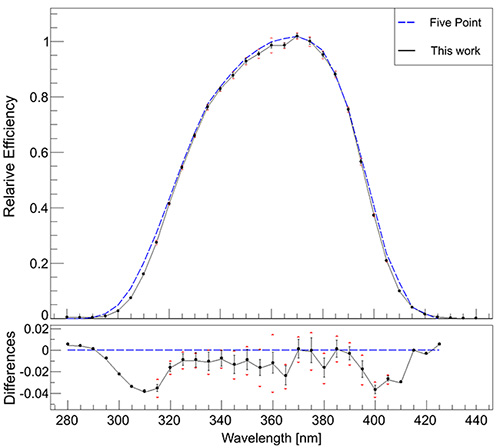 Figure 3: Relative efficiency for one telescope. Top: the five filter curve shown as a dashed blue line (as determined in 2006) and the present result shown as the solid line. Error bars are statistical uncertainties, and the red brackets are the systematic uncertainties. Bottom: difference between the five filter result and this work. The error bars and brackets are the same as in the top plot, shown here for clarity.

The aim of the work described in this paper was to measure the FD efficiency at many points across the nitrogen fluorescence spectrum with a reduced wavelength bite at each point, and to do it at enough telescopes to cover the different combinations of optical components making up all the telescopes within the Auger Observatory. As an example, Figure 3 shows the relative spectral efficiency for one type of telescopes based on this work compared with the previous measurement.

The overall uncertainty in the FD spectral response found in this work goes from 1.5% to 2.2% for the 27 telescopes of the Pierre Auger Observatory.