The Pierre Auger, ANTARES, and IceCube Observatories team up for a search of neutrino emission from the binary neutron star merger GW170817

On August 17, 2017 the LIGO and Virgo collaboration measured a gravitational wave originating from a binary neutron star merger.

Within 1.7 seconds, this event was followed by a gamma ray burst (GRB), recorded by the Fermi and INTEGRAL satellites, and subsequent electromagnetic observations in the optical and radio regimes. These observations made it possible for the first time to pinpoint the source location of a gravitational wave event. The source was found to be in a galaxy 130 million light years away, known as NGC 4993. According to model predictions such a system may also accelerate cosmic rays to extreme energies, and thus emit photons and neutrinos up to GeV to EeV energies.

A joint publication, accepted for publication in The Astrophysical Journal Letters and authored by more than 3000 scientists, including the Pierre Auger Collaboration, reports this first multi-messenger observation.

Every detection of a gravitational wave event is still exciting news for astrophysicists. This event is even more particular, since it is also confirmed for the first time by photon detection by other instruments and an additional neutrino search: an effort by the LIGO, Virgo, Pierre Auger, ANTARES, and IceCube collaborations. This event and its observations is going to be published in a joint publication of these collaborations in The Astrophysical Journal. 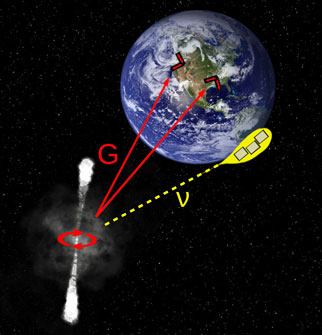 Figure 1: Illustration of the neutron-star merger GW170817 emitting gravitational waves observed at the two US sites of LIGO. The Earth skimming neutrino detection channel for Auger located in Argentina is illustrated as well (courtesy M. Schimp).

It marks the beginning of a new era of multi-messenger astrophysics. The combined gravitational wave and gamma-ray observation of this event tells us that there was particle acceleration by the source, which provides insight into the merger process and also means that very high energy neutrinos might have been produced. The detection of neutrinos would reveal even more information about the merger, including the density and energy of the hadrons involved and the energy dissipation mechanisms.

The search for neutrino emission from this collision of two neutron stars has been conducted in collaboration with both the ANTARES and IceCube collaborations, which bring improved sensitivities at lower energies. At the exact time of the merger, the source could fortuitously be seen from an ideal viewing angle for a search for Earth skimming neutrinos by the Pierre Auger Observatory. For IceCube and ANTARES, the direction to the source was in a part of the sky where the detectors are less sensitive, but still capable of making significant observations.

Figure 2 : Localizations and sensitive sky areas at the time of the GW event in equatorial coordinates: GW 90% credible-level localization (red contour), direction of NGC4993 (black plus symbol), directions of IceCube’s and Antares’s neutrino candidates within 500 s of the merger (green crosses and blue diamonds, respectively), Antares’s horizon separating down-going (north of horizon) and up-going (south of horizon) neutrino directions (dashed-blue line), and Auger’s fields of view for Earth-skimming (darker blue) and down-going (lighter blue) directions. IceCube’s up-going and down-going directions are on the northern and southern hemispheres, respectively. The zenith angle of the source at the time of the merger was 73.8° for Antares, 66.6° for IceCube, and 91.9° for Auger.

The first study concentrated on a time window within 500 seconds around the detection of GW170817, and yielded no associated neutrino events. Later, scientists expanded the search to include possible emission of high-energy neutrinos up to 14 days after the merger, suggested by theoretical predictions, and also searched for lower energy neutrinos associated with the merger remnant and ejected material. These follow-up studies did not find any significant emission either.

The lack of neutrino emission from GW170817 is in good agreement with the observation of a GRB from a high viewing angle, i.e., with the outflow jet not pointing towards Earth.

The Pierre Auger Observatory provides the worldwide best neutrino sensitivity in the EeV range and has set both the most stringent limits to a flux of diffuse EeV neutrinos, as well as model constraints for non-transient discrete sources. With a growing network of gravitational-wave detectors, it is expected that many more binary neutron star mergers will be discovered in the near future, expanding the capability to study these sources through high-energy neutrinos with the Auger Observatory.

The detailed results of the combined search for neutrinos are reported in a separate publication being submitted to The Astrophysical Journal, see:
https://dcc.ligo.org/LIGO-P1700344/public/main