One of the biggest challenges in cosmic-ray physics is to accurately pin down the absolute energy of a measured cosmic ray. 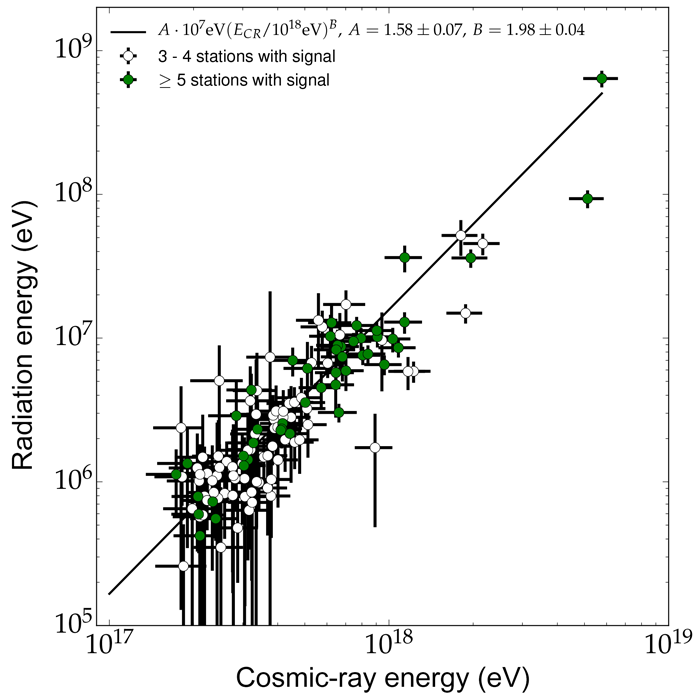 This is traditionally done with an array of particle detectors deployed on a large grid, which then sample the energetic "air-shower" particles made in atmospheric interactions of the original cosmic particle. This is a tough challenge for particle detectors because the complex interaction physics at the highest energies has to be extrapolated from measurements at collider experiments, which operate at significantly lower energies - even at the Large Hadron Collider (LHC). To accurately set the absolute energy scale, scientists using the Pierre Auger Observatory thus rely on combining the particle detectors (for Auger, water tanks used to measure the Cherenkov light flash made in the water by relativistic charged particles) with the nitrogen fluorescence detection technique. This works very well, but requires tremendous effort, in particular to control the effects of scattering and absorption in the ever-changing atmosphere. Now, we have shown that radio detection of extensive air showers can be a very powerful means to cross-calibrate the absolute energy scale of different experiments.

Indeed, the air showers comprise billions of energetic charged particles crashing through the atmosphere at very nearly the speed of light. As a result of the motion of these charged particles, detectable radio signals are generated in the same way that moving electrons in the broadcasting antenna of a TV or radio station emit waves detectable by common household receivers. With the antennas of the Auger Engineering Radio Array (AERA), we measure the electric field in the frequency range from 30 to 80 MHz that is emitted by extensive air showers. When three or more antennas have received a signal, we can reliably determine the distribution of the energy deposited per area at the ground in the form of radio emission. Integrating the signals across the ground surface covered by the antennas then yields the total energy in the radio signal - the "radiation energy".

As the radio emission does not undergo any significant absorption or scattering in the atmosphere, its value is independent of geometrical effects such as the inclination from the vertical of the incoming air shower or the observation altitude of the experiment. This "radiation energy" can thus be measured with any such specialized radio detectors worldwide - a dozen or so antennas can suffice to measure it and use it as a means for cross-calibration of different cosmic-ray experiments.

A comparison is made of the measured radiation energy with the well-established cosmic-ray energy determined with the Auger baseline particle detectors (see Figure). This allows us to set an absolute reference on the radiation energy expected at a given cosmic-ray energy. It turns out that a cosmic ray with an energy of 1018 eV (nearly 1,000 times higher than the LHC beam particle energies) radiates only 1.58 x 107 eV in the form of radio signals in the 30-80 MHz band. That corresponds to a tiny fraction of approximately 10-11 or 0.000000001%, and therefore required sensitive radio antennas and specialized electronics and techniques for reading them out and combining their signals into a coherent overall picture. Nevertheless, we have shown that this signal can be measured reliably and can be used for an accurate determination of the cosmic-ray energy.

Other experiments can now use our result to compare and cross-calibrate their energy scale with the accurate energy scale of the Pierre Auger Observatory. A further benefit of the radiation energy is that the radio emission expected for a cosmic ray with a given energy can be calculated from first principles by applying classical electrodynamics to the well-understood electromagnetic component of extensive air showers. A first calculation with two full Monte Carlo simulation codes shows that indeed the Auger measurement is in agreement with such predictions.