The Pierre Auger Observatory has detected more muons from cosmic-ray showers than predicted by the most up-to-date particle-physics models. 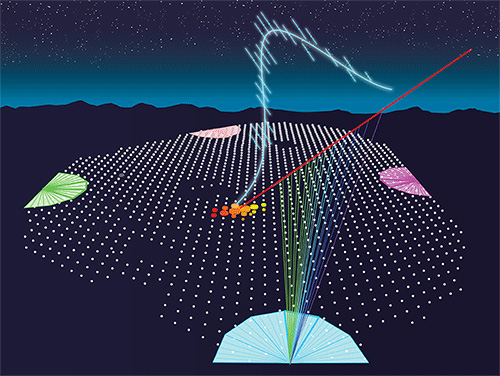 This illustration shows the detection of a hybrid event from a cosmic-ray shower in the Pierre Auger Observatory. The pixels in the camera of the fluorescence telescope (light blue semicircle) trace the shower profile — specifically, the energy loss of the shower as a function of its penetration into the atmosphere. Particles from the same shower are detected on the ground by an array of water tanks (white dots). The red line shows the trajectory of the shower. (credit: APS/Carin Cain)

The Large Hadron Collider at CERN produces proton collisions with center-of-mass energies that are 13 thousand times greater than the proton’s rest mass. At such extreme energies these collisions create many secondary particles, whose distribution in momentum and energy reveals how the particles interact with one another. A key question is whether the interactions determined at the LHC are the same at higher energies. Luckily, nature already provides such high-energy collisions — albeit at a much lower rate — in the form of cosmic rays entering our atmosphere. Using its giant array of particle detectors, the Pierre Auger Observatory in Argentina has found that more muons arrive on the ground from cosmic-ray showers than expected from models using LHC data as input. The showers that the Auger collaboration analyzed come from atmospheric cosmic-ray collisions that are 10 times higher in energy than the collisions produced at the LHC. This result may therefore suggest that our understanding of hadronic interactions (that is, interactions between protons, neutrons, and mesons) from accelerator measurements is incomplete. ...
Read full article here: https://physics.aps.org/articles/v9/125