Inauguration of the Pierre Auger Observatory

Scientists of the Pierre Auger Observatory celebrated the inauguration of their observatory in Malargüe, Argentina, on November 14, 2008. 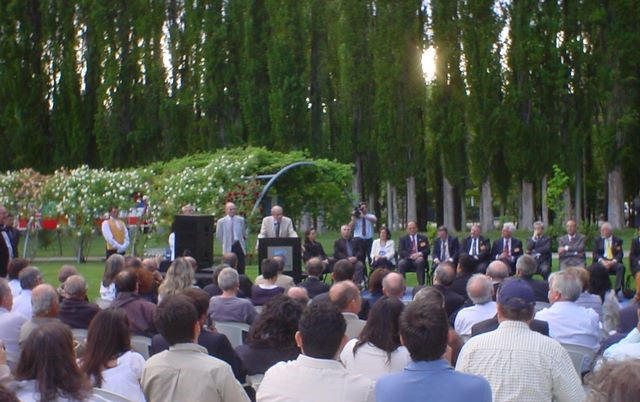 The event marked the completion of the first phase of the Observatory construction and the beginning of the project’s second phase, which includes the enhancements to the site.

The inauguration celebration in Argentina began with an informal reception on November 13. A symposium on Friday, November 14, included presentations on the origins of the project, the construction of the experiment and the latest science results.

To witness these extremely rare events, the Pierre Auger Collaboration began the construction of its Observatory in the year 2000. The project consists of an array of 1600 detectors spread over 3000 square kilometers in Argentina’s Mendoza Province, just east of the Andes Mountains. Surrounding the array is a set of 24 fluorescence telescopes that view the faint ultraviolet light emitted by the cosmic-ray shower particles as they cascade through the atmosphere. The collaboration includes more than 350 physicists from 70 institutions in 17 countries, which have shared the construction cost of approximately $53 million.

The Pierre Auger collaboration published its first physics results in the fall of 2007, revealing new insights into the properties of the highest-energy particles in the universe. The collaboration found that the arrival directions of the highest-energy cosmic rays are anisotropic. The arrival directions correlate with nearby galaxies that contain actively radiating black holes. Several science organizations selected this remarkable result as one of the most important scientific breakthroughs in 2007.

The collaboration used its growing detector array to measure the cosmic-ray energy spectrum at the highest energies, achieving higher precision than any previous experiment. The Auger scientists found a fall-off of the flux at the highest energies. This is consistent with an idea, proposed about 40 years ago, that cosmic rays interact with photons of the ubiquitous microwave background radiation on their way through the universe. New limits on the photon and neutrino content in cosmic rays have put stringent limits on theories of cosmic-ray origins.

The Pierre Auger collaboration includes more than 370 scientists and engineers from 60 institutions in 17 countries. More than 40 funding agencies are contributing to the Pierre Auger Observatory.