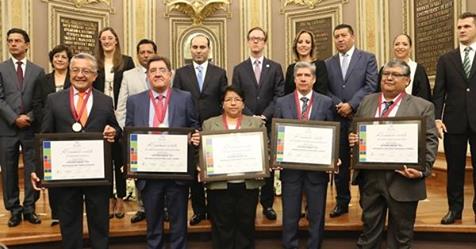 Humberto Salazar Ibarguen, researcher at the Faculty of Physical and Mathematical Sciences of the Benemérita Universidad Autónoma de Puebla (BUAP) in Mexico, received the medal of Science and Technology "Luis Rivera Terrazas" in recognition of his contributions in the field of Natural Sciences.

"My philosophy of life and research was in the sense that science and technology are the basis for improving the quality of life of a society" he stated and added, that he won this medal with the publications he has carried out in recent years on his work at the Pierre Auger Observatory to detect cosmic rays of ultra high energy.

He has also worked at the HAWC observatory in the Sierra Negra which detects gamma rays as well as with CERN in Europe, where he participated in the discovery of the Higgs boson.